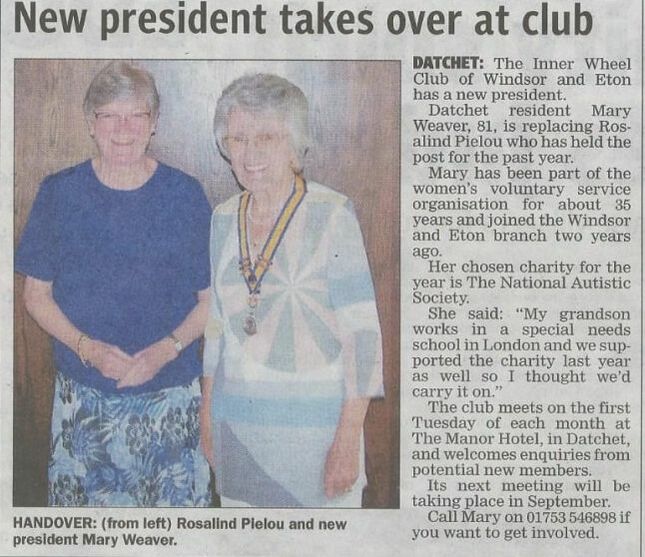 Inner Wheel is an all female organisation that has three Objectives:
To promote true friendship
Clubs meet regularly and have a full and varied programme through which friendships are built and maintained. Visiting other clubs and joining in their activities broadens the opportunity to make new friends.

To encourage the ideals of personal service
Inner Wheel clubs have an outstanding record of service to the community. Initially members provided goods, quite often homemade, to the poor of their communities. The ethos spread rapidly through the country and then abroad.  Inner Wheel has adapted to the needs of the country as society has changed. Some members still knit and clubs collect tons of useful goods for the needy but much is now sent abroad. In this country members support refuge centres for abused women, hostels for the dispossessed, child centres and drop-in centres, school breakfast clubs and much more.  All this is carried out in the spirit of friendship.

To foster international understanding
International Inner Wheel was formed in 1967 and the clubs have since spread to 103 countries with a 100,000 members worldwide, 15,500 of those of those being in Great Britain and Ireland.
​
FRIENDSHIP with SERVICE truly reflects a typical Inner Wheel Member. ​

The Inner Wheel Club of Windsor and Eton meets on the 1st Tuesday of the month (not August) at the Manor Hotel, Datchet. New members are welcome if pre-booked.  The President is Mary Weaver 01753 546898 and  Membership Officer Jean Davis 01784 482414
​
Links 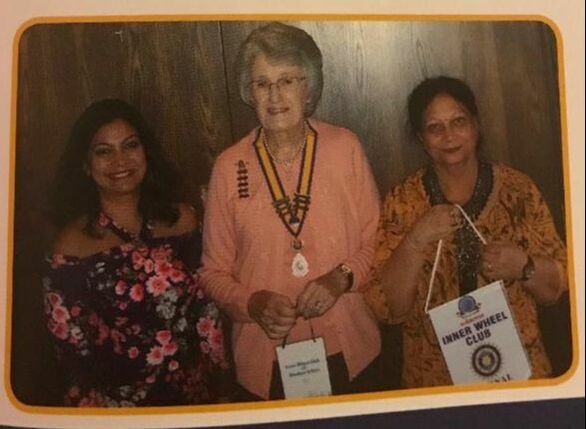 Windsor and Eton Inner Wheel Club was delighted to welcome to their September meeting an international guest from India.  Parinita Kapoor is President of the Inner Wheel Club of Karnal Mid Town, India. The town of Karnal is in the state of Haryana and situated nort of Delhi and not far from the Punjab.  It has a population of nearly 300,000.  Parinita was welcomed by President Mary Weaver and the two Presidents exchanged banners.  Karnal Inner Wheel Club is actively involved in many community projects including providing food and clothing for disabled children and encouraging mothers to breast feed.  Donations are also made to help run orphanages.

The photograph shows President Mary Weaver with Parinita Kapoor and her daughter Aanchal. 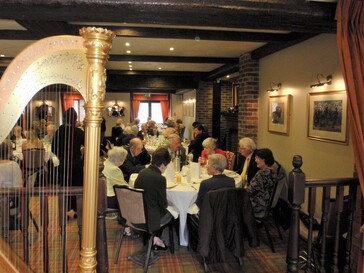 Members of District 9 Inner Wheel and the longest surviving club so far, the Inner Wheel Club of Windsor & Eton, celebrated its 80th anniversary at the idyllic setting of Stirrups Country House Hotel in Maidens Green (Bracknell) together with friends and families, including the RBWM Mayor and Mayoress. Seven of our own Rotarians and their spouses also attend, along with former member Bob Heybourn and Christine.
The celebration was started by the current president Mary Weaver, with words of gratitude about the past, present and the future.  Representatives from District 9 (Vicky Mountford), the Association of Inner Wheel Clubs in GB&I (Ann Acaster), the Royal Borough of Windsor and Maidenhead (Mayor Paul Lion), Windsor & Eton Rotary Club (Richard Carleton) and the Rotary Club of Windsor St. George (Andreas Stavrinides) presented their greetings and spoke highly about the Inner Wheel Club's involvement in the local communities.
The lunch guest  was a distinguished harpist, Margaret Watson Dip. ABRSM, one of the busiest professional harpists in the South East, with performances for social and corporate events.  Not only did Margaret play a wide variety of music, ranging from 'pop' through 'traditional' to classic, but also talked about the harp as an instrument; how it was made (cost of a new one about £30k); the (47) strings, tuning and playing - seven-foot pedals with 3 positions for each pedal!  Absolutely fascinating and informative - and her final quote, from the composer Shostakovich, "a harpist spends 90% of the time tuning the harp and 10% of the time playing out-of-tune" brought the house down.
By Chris Simon and Paul Andreianu